← Reich TV by Jeff Pearce (2011)
The Superpowers–They Are Merging → 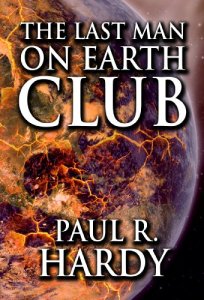 Description:
Therapy groups support people traumatised by a common issue, such as cancer, sexual abuse, or PTSD suffered in war. This therapy group is for people who were the last survivors of their world.

Each of them was rescued from a parallel universe where humanity was wiped out. They’ve lived through nuclear war, zombie hordes, machine uprisings, mass suicide and more. They’ve been given sanctuary on the homeworld of the Interversal Union, and placed with a therapist who works with survivors of doomed worlds.

Review:
How would you like your apocalypse served? Zombie? Nuclear? Machine war? Genocide? Combustion into ash? Mass suicide induced by alien energy beings?  Well, you get the all-in-one combo with this book.

The Last Man on Earth Club explores the experiences of six apocalypse survivors from six parallel Earths. It’s examined through the therapy sessions run by Dr. Asha Singh, where she treats the survivors recovering on the homeworld of the Interversal Union (IU). The IU is like a multiverse UN where it provides aid to all the parallel Earths, because apparently the end of the world is happening somewhere all the time. While it’s told from the doctor’s first person POV, it often reads like third-person as she often takes the role of a detached observer, and we learn of the patients’ experiences through their dialogue and progress in therapy.

It’s an unusual concept, but it works. The tone is brooding yet clinical, creating an effective contrast to the horrifying apocalypses described by the survivors. It’s not a fast-paced page turner, but it will hold your attention throughout all 170,000 words. The real nature of the apocalypses and the survivors’ experiences are revealed slowly, and each apocalypse experience is memorable with its own set of conflicts to grapple with.

The six survivors are well-developed characters with distinct personalities. Their interactions, conflict, and growth drive the narrative of the story. While they have severe problems and their quarrels can get over the top, they are sympathetic characters and they don’t come off as melodramatic. This is a character-driven story that really makes the connections between adversity, suffering, and healing.

I liked the parallels to contemporary international regimes. The Interversal Union’s resources are strained by the amount of apocalypse refugees that require their need. There’s an organization that parallels the International Criminal Court, and the characters are polarized in their attitudes towards justice, revenge, and prosecuting people for genocide. These real world parallels make the survivors’ ordeals even more compelling–resulting in an emotionally powerful novel that’s never short of ideas worth reflecting on.

My suspension of disbelief was stretched with one survivor’s world where half the population had superpowers. This world had a lot of calamities and bioengineered abominations that came out of some seemingly nonsensical experiments. There are some moments where this book sacrifices practicality for Rule of Cool (or more precisely, Rule of Nightmare Fuel), and it would have been nice if multiverse-travel was explained further. But these are minor criticisms of a very solid science fiction work.

The Last Man on Earth Club is highly recommended, especially for fans of dystopian and apocalyptic literature. If you like the first few chapters and want to learn more about the characters, then go for it, and it only gets better from there. It’s a dark, original, and intelligent science fiction book that continues to give me some food for thought, and also perhaps a little hope.

Other reviews of this book: Sift Book Reviews, Bookish Ardour

You can read a neat interview with the author on Bookish Ardour. Hardy also has an interesting blog post about narratives in apocalypse fiction, explaining a bit of the background behind this book and its unique concept. I also recommend reading something more uplifting before and after you read this novel, lest you get too introspectively broody. The survivors are neat to read about, but you really don’t want to start feeling like them.

← Reich TV by Jeff Pearce (2011)
The Superpowers–They Are Merging →